The Harlem-based chef has a new ramen experience available for purchase during the week of the holiday.

Rasheeda Purdie, founder of Ramen by Rā, is hosting a Juneteenth-inspired ramen experience this year | Photo by Frank Marando, courtesy of Rasheeda Purdie; Design by Maitane Romagosa for Thrillist

Rasheeda Purdie, founder of Ramen by Rā, is hosting a Juneteenth-inspired ramen experience this year | Photo by Frank Marando, courtesy of Rasheeda Purdie; Design by Maitane Romagosa for Thrillist

Rāsheeda Purdie’s community-centered approach to ramen is one of the most unique pandemic-born food experiences out there. For the D.C. native and stylist-turned-chef, her solo business venture located in the culturally rich, brownstone-lined streets of Harlem not only adds to the neighborhood’s historied culinary landscape, but does so while celebrating cultural ties in each bowl.

Her business, Ramen by Rā, where she offers unique ramen experiences, was born as a result of what she describes as a “leap of faith.” While working in the fashion world at a Fifth Avenue department store, Purdie noticed a shift in how people were consuming and purchasing fashion online versus in-person. After realizing she had to adapt to the changes the industry was going through, it led her to branch out into another field that interested her: food. In 2015, while working as a stylist for Henri Bendel in New York City, she enrolled in culinary school part time and took on an internship at The Cecil working with executive chef Joseph “JJ” Johnson.

“I love working with my hands and building up this habit of going to fashion shows, going out to eat, and eating all of this lavish food. I wanted to experience food on another level,” she says. “I want to experience food in an artistic way as if I were a stylist.”

Purdie eventually left fashion to enter the culinary industry full time. Along the way, while working at notable Harlem restaurants, she developed almost mentorship-like relationships with several of their owners, including Johnson, Melba Wilson of Melba’s, and chef Marcus Samuelsson of Red Rooster. After years of working in Harlem, in 2019, Purdie became an assistant general manager with a focus on hospitality at a Midtown shared working space, but was eventually laid off because of the pandemic.

Instead of working for another company to help fulfill someone else’s dreams, Purdie decided it was time to launch her own. “I wanted to finally give myself a shot,” she says. “I wanted to see how far I can go with my ideas on my own.” And as a ramen fanatic, it’s how Ramen by Rā was born. Being one of her favorite dishes, Purdie began forming the blueprint for what would become her company. Since most restaurants were closed at the height of the pandemic, she “was very bitter about not being able to have ramen,” and took advantage of her extra time by teaching herself how to make it from scratch through documentaries, videos and cookbooks. “As much as this pandemic is bittersweet, it allowed me to take advantage of the time that I had to learn things that I probably wouldn’t have, like ramen,” she recounts.

Purdie got her business up and running primarily by herself, including designing the website, capturing photos, marketing, and of course, being the chef behind all of its eye-catching ramen offerings. During the fall of 2020, Ramen by Rā launched in collaboration with Ada Supper Club to provide unique ramen experiences for people to enjoy at home. So far, she’s executed five ramen experiences, including “Renaissance,” which focused on stillness and patience, and “Resolution,” which was dedicated to the start of 2021. Next is “Roots + Ramen,” which will honor and celebrate the legacy of Juneteenth, a holiday marking the day when Union soldiers traveled to Galveston, Texas to deliver the news that slavery had been abolished.

“I’m really happy to do experiences as it relates to the fusion of cultures. Juneteenth is a very good holiday for that because I’m infusing what I know and what I’ve learned about Juneteenth (and its foodways), and blended it in with Asian techniques of cooking,” she says.

Ramen by Rā’s Juneteenth experience consists of three courses and relates to the holiday’s food, and its tradition of red foods, which historians attribute several sources to the color’s symbolism, including it representing strength in many West African cultures, and bloodshed of the lost ancestors that didn’t live to see freedom.

The first course is a black-eyed pea edamame salad with blistered cherry tomatoes and balsamic soy vinaigrette with an egg yolk. The second course is a watermelon ramen with spinach noodles and a chilled broth of watermelon juice mixed with a vinaigrette (barbecue short ribs, watermelon poké, watercress and fried garlic also make appearances in this refreshing dish).

“The watermelon ramen is my favorite of them all because it’s so out of the box and relates to our culture. It also relates to the Asian culture because watermelon or melon soup is actually really popular in Korea, and it is giving off the red color tradition for Juneteenth. I’m very happy to bring watermelons to a brighter light even with the history that it has,” Purdie says.

The third course is a red velvet cake roll with sweet buttercream inside, made to resemble narutomaki, the pink and white fish cake found in some ramen dishes, along with a strawberry sage soda. Purdie made sure to include little hidden gems in each course, like the narutomaki, and every course has something either green, red, or black inspired by the Pan-African flag.

Red velvet cake roll that comes inside of the Roots + Ramen experience | Photo by Frank Marando, courtesy of Rasheeda Purdie

Purdie believes food acts as a medium to connect and bring people from all backgrounds and identities together, and she wants her especially created ramen experiences to aid in building these relationships.

“We are in a world where there’s a lot of division and when you sit there and eat or you talk and you are a part of the community, we are all one. There’s so many different things that I’ve learned while studying Asian culture that I have similarities and know of through my own culture. I want to bridge the gap between cultures, whether it’s through food, community, holidays, traditions, upbringings, or religions,” Purdie says. There’s so many ways to reach each other and that’s what I want my ramen to do.”

If you’re in the NYC area, you can RSVP to pick up a Roots + Ramen package June 14-18 on Tock. The pickup date is Saturday, June 19 between 12 pm and 2 pm in Harlem. Further information will be provided once you RSVP. Get more updates on Roots + Ramen and upcoming events Purdie hosts by following her on Instagram and visiting her website.

Kristen Adaway is a staff writer at Thrillist. Follow her @kristenadaway.

Remaining in? There are dozens of lessons and demonstrations for home cooks

Fri Jul 9 , 2021
Philadelphia is open up, but for the property cooks who opt for to remain in, there are plenty of virtual food stuff, wine, spouse and children-pleasant, and interactive culinary courses available on the net. Movie star cooks, including Jennifer Carroll of Spice Finch are between the stars developing ordeals. There […] 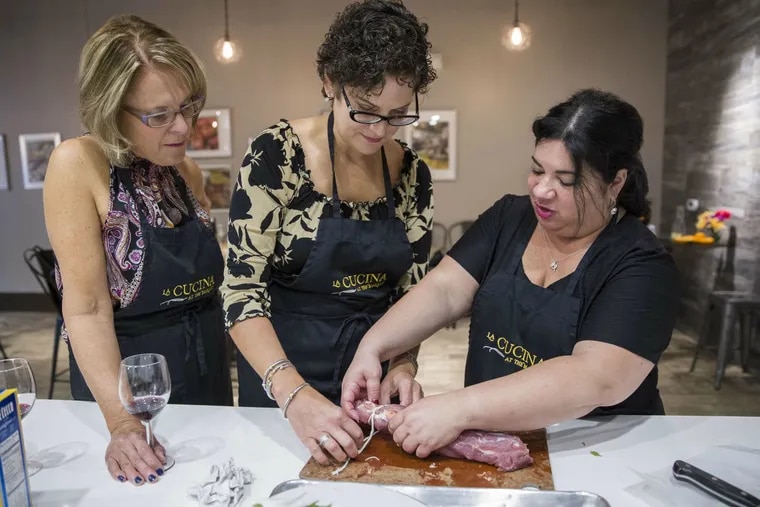