Table of Contents The Jerk JointMiss Brown’s Fine Food IICaribbean TasteLil Jamaica Put down that fried chicken sandwich, and pick up a sandwich filled with smoky, spicy, moist jerk chicken. Most likely made from a family recipe.  As national chicken restaurant chains have been moving into the Green Bay area and the […]

Put down that fried chicken sandwich, and pick up a sandwich filled with smoky, spicy, moist jerk chicken.

Most likely made from a family recipe.

As national chicken restaurant chains have been moving into the Green Bay area and the Fox Cities, so have restaurateurs serving jerk chicken. While the national joints hold grand openings with long lines, the jerk joints have built a local taste for Caribbean flavors by word of mouth.

In the most traditional recipes, jerk chicken is smoked with a blend of seasonings that includes allspice, ginger and Scotch bonnet peppers. That’s the source of the heat most people associate with jerk chicken. But the term, jerk, has more to do with stabbing and poking — or jerking — the chicken before applying the seasoning and cooking, accordng to the owners of local restaurants and food trucks specializing in Caribbean fare.

The family recipes they use to make jerk chicken can be traced to Jamaica and Haiti and Trinidad. Customers can opt for meals with traditional sides of rice and peas with steamed cabbage or break with typical jerk chicken options for some decidedly Wisconsin tastes. A side of mac ‘n’ cheese with a jerk bratwurst anyone? Also, there are jerk chicken nachos. And tacos. And egg rolls. And … well you get the idea.

While jerk chicken’s popularity might draw in customers, it also serves as an introductory dish to a wider variety of Caribbean dishes.

Here’s what you need to know about them.

Bringing the spice: Fay and Roderick Godwin opened The Jerk Joint after moving from Florida to the Fox Cities three years ago. Their jerk chicken follows an adapted family recipe. Roderick’s father, Phil, regularly cooked foods popular in his homeland of Trinidad, a Caribbean island nation near Venezuela. Jerk chicken was among the popular dishes with his dad’s friends during poker nights.

The reason they call it jerk chicken is just the stabbing technique you do so the seasoning gets all the way through the meat, Roderick said.

After roughing up the chicken, it gets rubbed with green seasoning, which includes green onions, cilantro and habanero peppers. Then the chicken marinates in the fridge for two days.

Roderick then rubs the chicken with his family’s jerk seasoning blend that includes allspice, cloves, hot cayenne peppers and cinnamon. Jerk seasoning gets applied to a bevy of other dishes including ribs and homemade mac ‘n’ cheese.

Finally, the chicken spends a few hours in the smoker.

“When we started, we made it how we were used to it but not everyone can handle the spice,” Roderick said.

The “World’s Longest” Chicken Jerk sandwich lives up to the name. Coming wrapped in foil, it stretches from elbow to fingertips.

And jerk chicken rolled into “Doobies” should not be missed. Roderick generously fills an egg roll wrapper with the chicken and seasoned cabbage before deep frying. Each doobie is sized more like an entree than an appetizer.

More Caribbean flavors: Meals can be ordered with classic sides of rice and peas with cabbage.

Pop in on Fridays and Saturdays for bowls of cabbage and rice and peas topped with ox tail or goat curry. A long slow braising of oxtail transforms it from tough to tender, Roderick said, while the goat tastes like beef with just a little extra tang at the end. Kind of like how a venison burger or sausage (which Roderick says has been one of his favorite culinary discoveries since moving to Wisconsin) has that extra kick of flavor.

When winter returns so will red pea soup and goat head soup. Roderick calls them healing soups. They perk you up when a cold has you down or even when nursing a hangover, he said with a laugh.

The menu is rounded out with curries, variations of jerk seasoned dishes and other specials. Hours: 11 a.m.- 2:30 p.m. and 4-8 p.m. Tuesday through Saturday.

Bringing the spice: Owner, Phill Brown, said the roots of his jerk chicken recipe go back to Jamaica, where his grandmother Kathleen Godfrey ran a restaurant. His mom, Jean Brown, worked as a cook and server at the restaurant before grandma, mom and the whole family moved to Chicago and then a few other cities before landing in the Fox Cities in the mid-1990s.

Miss Brown’s Fine Food II started in 2016 as a food cart, serving hungry bar patrons in downtown Appleton after 11 p.m. Using family recipes, Phill served jerk and curry chicken with rice and peas and steamed cabbage as sides. Food cart success led to opening the restaurant in January 2020, which allowed him to expand the menu.

Jerk chicken: Mild and not spicy by design, Phill said he tailored the family recipe so customers can get a better taste of the seasonings applied to the boneless meat.

Jerk chicken is available as a meal with traditional sides, just as it was during the food cart days.

But in a fusion of Wisconsin and Jamaican tastes, jerk chicken also tops cheese fries, which are topped by ribbons of mayo and barbecue sauce with a few green onions for good measure.

More Caribbean flavors: Order ackee and saltfish if you want to try the national dish of Jamaica.

“Jerk chicken isn’t our national dish,” Phill said. “There is so much more than that to our culture. It’s really great to see someone order something like that.”

Ackee is scientifically a fruit but culinarily a vegetable. Its creamy mild flavor would clash in a fruit salad of berries and melon but provides a good balance to the salty fish.

Oxtail and goat curry meals are menu regulars on weekends. Non-goat curries and other specials round out the daily menu.

Whatever you’re having for your main dish, add an order of banana fritters for dessert. Powdered sugar melding with fried cake batter and warm banana make for a sweet treat that’s not cloying.

Bringing the spice: Reggie Desamour grew up in Haiti and first arrived in the Fox Cities with a Fox Valley Technical College scholarship to study agriculture and business.

After graduating he moved back to Haiti, then lived in New York for a while before coming back to Wisconsin and returning to school for radiology. During this time he started making some of his favorite dishes for friends and found that more to his liking than school.

In 2019 he started his food truck. Calls for a stop by Caribbean Taste’s bright red food truck keep Desamour hopping at 10 or more locations a week in summer.

Jerk chicken: Adapted from his mother’s jerk chicken recipe, the heat hits around the same level as a jalapeno popper or bacon-wrapped jalapeno appetizer. It’s not smoked but it’s full of the classic jerk flavors.

Mangos have long been a favorite food of Desamour, who did some recipe experimenting to figure out how to balance the fruit and chicken flavors.

Mac ‘n’ cheese also gets a hit of jerk flavor.

Beyond jerk: Garlic pork is an option that’s not as spicy as the jerk chicken. Also, the island shrimp can be ordered spicy or not too spicy.

Of the side options served with meals, Desamour said rice and beans are a big hit. Pikliz, a vinegary Haitian coleslaw with a splash of heat, is also a popular side.

Where: 1332 S. Broadway, Green Bay, and events and other locations. Check their Facebook page for mobile locations.

Bringing the spice: Derron Wilson grew up in Hanover, Jamaica, 30 minutes west of Montego Bay. His partner, Janel Johnson is an Oconto native. How they met is a good story told by fellow reporter Kendra Meinert as part of a full feature article about Lil Jamaica.

What started as a food truck in September 2019 expanded to a bar and food truck business in July last year.

Jerk chicken: Wilson developed his recipes to keep the heat in check. Expect a smoky chicken with plenty of ginger and spices. Feel free to crank up the heat with one of three sauces.

Jerk tacos and nachos are regulars. But don’t be surprised to see a menu listing a jerk brat. It’s not the lone Wisconsin influence on the menu as Johnson’s homemade mac ‘n’ cheese regularly sells out.

Thu Sep 2 , 2021
LAS VEGAS (KTNV) — Dirty Dining has had a lot of foodstuff vans these days. This week, a spot that companies quite a few of them and serves as their industrial kitchen area is in incredibly hot drinking water with the Health and fitness District. Bees, beetles, ants, flies, rat […] 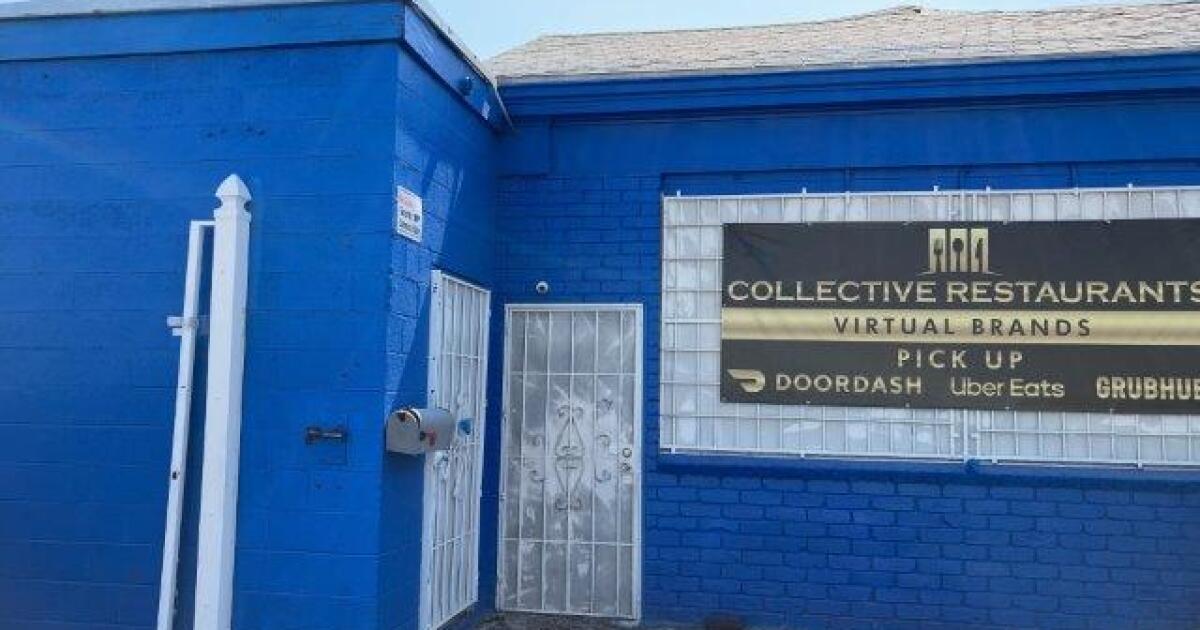